The Biblical Roots of Rosh Hashana

In the Scriptures the first of the Fall Feasts is not called Rosh HaShana, which means the ‘head of the year’. The tradition that Rosh HaShana marks the start of the yearly calendar was introduced a long time ago during the Babylonian exile. Most cultures have a creation event of one type or another and Babylonian mythology placed the creation of the world in the Fall season. It’s possible that this influenced the Jewish exiles that the world was created on the 25th of Elul, which is a month in between the summer and fall seasons. This date is derived from exegeting the Genesis text and the numerical value of the word יִהיֶ (ye’he, let there be) which is 25. According to Genesis 1, Adam and Eve are formed on the sixth day of the creation week. Six days after the 25th would be the 1st of Tishri and thus according to the creation account in Genesis would mark the creation of Adam and Eve.

In the Bible this day is called Zikhron Teruah (Leviticus 23:24), which translates as ‘a memorial of trumpets’. The feast is renamed in Numbers 29:1 as Yom Teruah, the day of trumpets. As noted above it falls on the first day of the Hebrew month of Tishri. Yom Teruah is the only feast to fall on the first of a new month and therefore also a new moon. The Bible gives no real explanation and meaning to the day. Its importance and significance have developed with tradition over time. From the Scriptures the two names imply that this is a day of memory and a day of action. The command to remember is the most common command that the Lord gives in the Bible. From the Hebraic perspective memory is always linked to action. The way you remember something or someone is to participate in an action or activity. Hence it makes perfect sense in the Hebraic mind that Jesus commands us at the Last Supper to: do this to remember Me. The Scriptures call the Israelites to participate in the blowing of trumpets, or shofars in Hebrew. Today the Jewish people will blow the shofar over 100 times during Yom Teruah. It is the blowing of the shofar that makes Rosh HaShana unique from other festivals. And it is in the activity of the Day of Trumpets that will inspire memory of what the Lord has done and what He will yet do.

The shofar appears in the Bible many times and reminds us of such events as the fall of Jericho, the summons to war, the preparation of the Sabbath. The sound the shofar heralds the coming of the Messiah and the day of judgment. The shofar itself is customarily a ram’s horn. The ram links us also to the story of Isaac and the ram that became his substitute offering on mount Moria. Indeed one of the Scriptures that is traditionally read on Rosh HaShanah is the Akedah, the binding of Isaac in Genesis 22. In this story Abraham and Isaac both show their great devotion to God. Abraham demonstrates this in obediently offering his beloved son to God and Isaac in his willingness to allow his father to perform the sacrifice. According to Jewish tradition Isaac is not a young boy, he is actually 37 years old. This is deduced from the book of Genesis which records that Sarah was 90 years old when she gave birth to Isaac.

Immediately following the Akedah, when Abraham comes back from the mountain without Isaac, the book of Genesis says that Sarah dies and she is 127 years old. Thus the Jewish sages concluded that Isaac was actually a grown man who could easily have fought off his father, but rather willingly gave himself as a sacrifice. Genesis 22:2 is the first time that the word love appears in the Bible. God says to Abraham to: “Take your son, your only son, whom you love—Isaac—and go to the region of Moriah. Sacrifice him there as a burnt offering on a mountain I will show you.” When words appear for the first time in the Bible, the context of their appearance adds nuance to their meaning. Because of Genesis 22:2, love will always be connected to sacrifice. True love is not something you hold onto, its something you give away. Love cannot be contained but must be shared with others for it to have true value and meaning. Abraham loved his son Issac very much, but he demonstrated his love for God more through his obedience. Similarly Isaac loved his father very much and demonstrated his obedience to God through his willingness to become the sacrifice. And very importantly the Lord demonstrated his love for both of them with the provision of the ram substitute. As we celebrate this Rosh HaShana we can be reminded of God’s love and provision as we enter the new year. Preparing ourselves to share God’s love as well as our own love with all whom we encounter, and perhaps making the new year that little bit sweeter for everyone.

Rev. Aaron Eime is a Deacon at Christ Church, Jerusalem and Bible Historian and teacher for CMJ Israel. Aaron studied at the Hebrew University in the Masters Program with the focus towards Early Jewish and Christian Interpretation of Bible. He also studied Psychology and Sociology at Queensland University in Australia. He is a dedicated Bible teacher exploring the Hebraic Roots of the Christian Faith and has taught internationally including Europe, North America, Hong Kong and China. He lives in Jerusalem with his wife and 3 children.
View all resources from this author
Audio 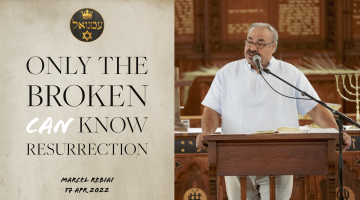 Only the broken can know Resurrection | Marcel Rebiai

The crucified Messiah is risen! Hallelujah! Jesus is not just resurrected. He is Resurrection itself.
7 months 2 weeks ago
Article 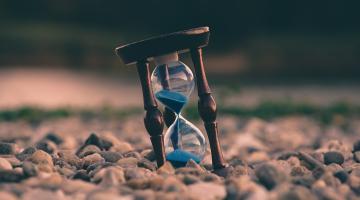 What can we learn about 'time' by looking at a with a Hebraic Context?
5 months ago
Video 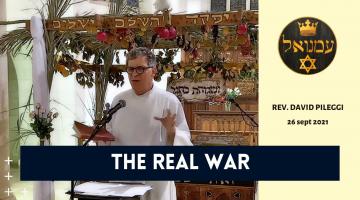 As we celebrate the Feast of Michael and All the Angels, we reconsider the fundamental nature of the spiritual conflict that believers face.
1 year 2 months ago